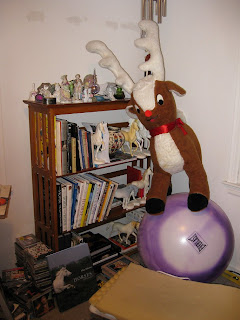 O.K. I've been away from blogging for awhile. . .sorry about that folks! I've also been away from anything resembling actual WORK for awhile too so my most recent activity has been cleaning. . .and cleaning in my studio. Mind you, my "studio" is a 10 x 10 foot room that doubles as the dumping ground of choice for various things that have no official home. Yeah, I work in the JUNK ROOM, there, I said it! Don't laugh. . .you have one in your home too, you're not fooling anybody!
Anyhow, I need to clear some space in here and get back to sculpting. This is NOT an easy task because;
1. The entire main floor of our house is about 750 sq. feet.
2. Jim and I are both total pack rats
3. There are frequent differences of opinion as to what is valuable and what is not.
For example, the most recent addition to my space. :^\ Yeah, I've been known to go and pluck various treasures from the neighbor's trash after dark. Something which, BTW, Jim has voiced disapproval of in the past. Ironic, considering his recent acquisition of this ENORMOUS four foot tall stuffed Rudolph The Red Nosed Reindeer, wouldn't you say? "Why would they just throw something like this out? I couldn't just leave it there" He said, with a smirk on his face. Now, this gaudy (and somewhat smelly) item was dragged in on a Saturday morning as a joke, and indeed it was funny. But then Kermit, our French Bulldog, instantly developed an amusing love/hate relationship with it and Rudolph became a long-term guest in our home. *sigh*
This really doesn't have anything to do with sculpting. . .other than the fact that it's incredibly distracting and uninspiring and it's stinking up the place. . .I didn't have much else to talk about and I decided to write a small homage to it before I threw it down the basement steps. I wonder what the neighbors will think when they see it show up in *our* garbage pile in 10 or 15 years?
Posted by Katherine Bogucki at 6:11 AM 4 comments: Links to this post