Time to tell the tale of the tall tail.

Or would that be the tall tale of a timely tail?
Well, no matter how you say it . . .there's a tail on the way. I thought I should get this underway just in case the people who hate bases on models were about to stage some sort of riot. Haha! 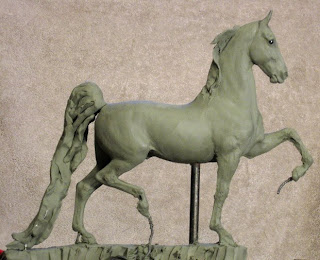 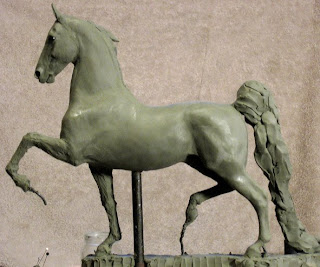 Indeed, he will be balanced by this looong tail. Saddlebreds are one of the few breeds where an artist can get away with this realistically. The challenge is trying to sculpt it in a way that it doesn't end up looking like a malformed fifth leg. 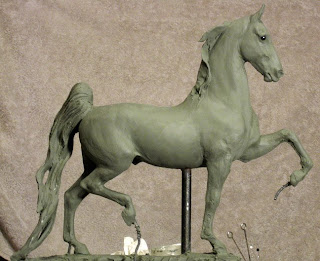 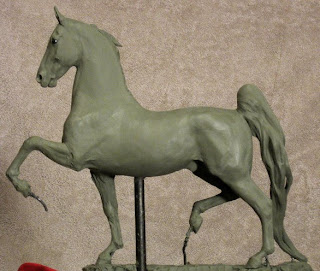 It's definitely well underway, but I won't know how effective it is as a steady third point until I have a resin prototype in my hands. Then I will be able to play with the angles and tweak it so it isn't "tippy."

Posted by Katherine Bogucki at 11:18 PM 9 comments: Links to this post 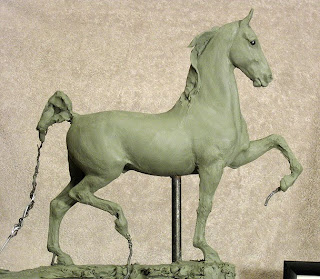 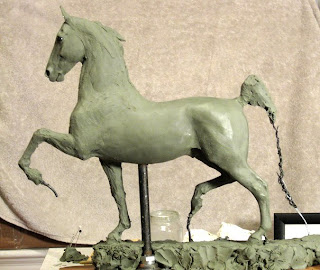 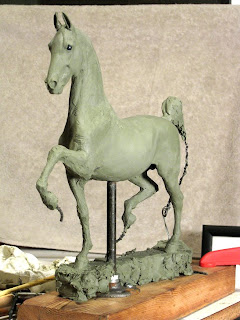 Stay tuned. . .
Posted by Katherine Bogucki at 6:19 AM No comments: Links to this post

. . . but I'm still trying to decide what it was. :^\ Maybe it was the fact that trying to draw and cut out tiny horse bones to scale in the middle of the night is probably not the best use of time? Perhaps it was that little paper horse bones with pins through them don't behave like real bones with actual joints? What about the fact that the diminutive bones may not have been quite diminutive *enough?* There is, of course, always the possibility that this was a good idea that actually DID help. . .just not in the way I thought it was going to. 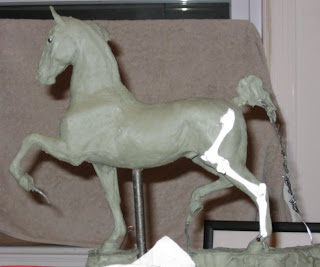 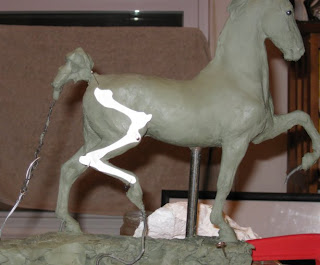 The bones lined up reasonably well on the leg I wasn't concerned about but would NOT fit on the other side in any sort of useful way. Hmmmm. Should I be more concerned about the leg where the bones didn't fit. . .or the one where they *did?* hahahaha! My eyes said the raised leg was still the problem since I hadn't been happy with it since the beginning. 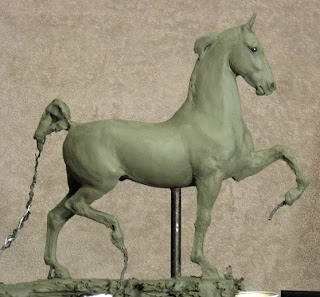 The process of drawing the bones and getting them on the horse must have been useful, in some way or another, because I was FINALLY able to resolve the problem and get that leg looking more natural.
I'm afraid these progress pics aren't very interesting to look at now that the changes between them are so small. It's probably like doing one of those frustrating games where you're trying to spot the differences between two seemingly identical pictures. 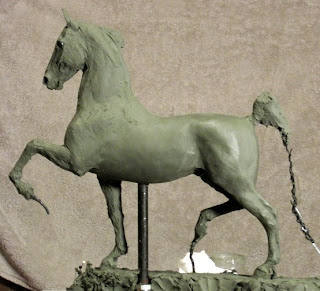 Posted by Katherine Bogucki at 4:39 AM 2 comments: Links to this post

Seriously. . . I don't even know what day it is. Very soon I will be all caught up between where I am with the sculpture NOW and what these photos are showing. It's getting hard to remember what I had done when the photos were taken. :^\ 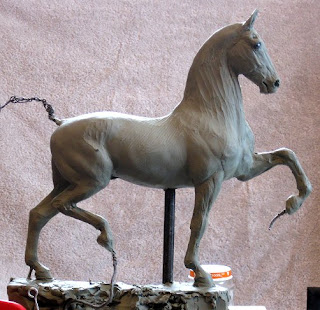 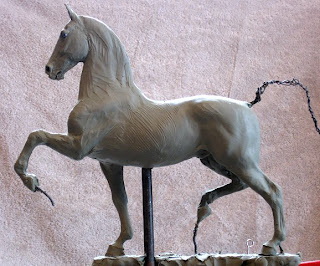 For instance THIS is where I had stretched his neck out a bit EGADS! Is that sunlight shining through the window? AHHHHHH! It BURNS! It bur. . .oh wait, I guess I'm o.k. Carry on then. . . I'm not liking that rear leg as much as I thought I was. Time to start measuring again. . . 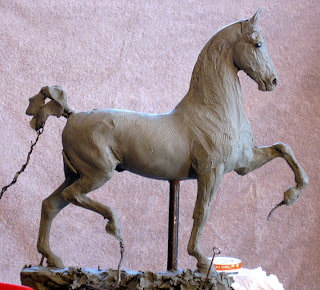 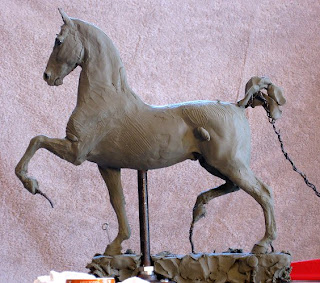 Huh. . . add this one to the list of things I'm going to have to resculpt. I *thought* I was making a good move with the rear leg. If only there was an "undo" button in real life. *grumble* My Dad had been here at this point, lending a practiced eye and strong moral support. When I told him that I had pulled it's head up to lengthen the neck, he thought it could use some more of the same primitive Chiropractic treatment. Doesn't he look perky now? It's amazing how the smallest changes in length and angle can make such a big difference! Now to apply the same theory to that rear leg. If only these changes weren't opening HUGE cans of worms all over the place. The more correct one area looks. . .the less correct other things look. Because this is a portrait of a specific horse, I have to work within the parameters of that horse's measurements and characteristics. So, at this point, the whole project is like one of those frustrating little puzzles where you have to use that single empty space to slide the little squares around in the bigger square and put them in order. As a matter of fact, you can see right where one of those little squares has been moved in the last two photos. His ears had to be cut out and lifted up to achieve a particular silhouette. So, now he has a delightful Frankenstein's monster-esque skull cap scar. Thank goodness for soft oil clay! It makes these changes a WHOLE lot easier!
Posted by Katherine Bogucki at 1:14 PM 1 comment: Links to this post

This is the stage where things cease to be terribly enjoyable. . .endless hours of sculpting, rethinking, second guessing, RE-sculpting, and wishing the end was in sight. Unfortunately, it's so far off you can't see too many hints of what the finished horse will actually look like yet. 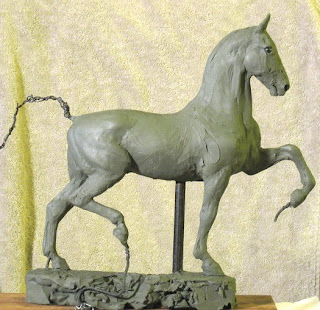 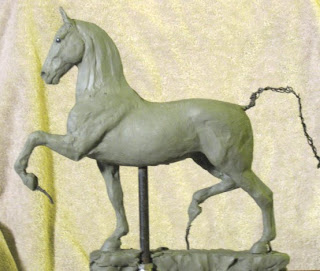 Looking a bit better on the right side. . .except for that rear leg (insert sound of me banging my head against the wall) Left side seems to be coming along o.k. but overall he's still pretty "meh." 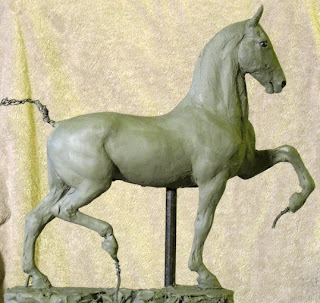 At this point I think I had grabbed ahold of his head and yanked it upward on the armature to get a little more length in his neck. Sometimes you've just gotta do what you've gotta do! Better to do that sort of thing at this stage than realize you have to do it later on when things have been "finished." I *think* I might have a better handle on that raised rear leg. It's amazing what some actual measuring can do! DOH! I'm still not sold on the whole thing but I'll get back to it later. The time has come to start whittling this boy out of his pudgy stage and make him look a little more refined so I can see what I'm REALLY dealing with. 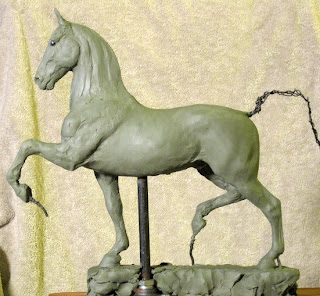 Hello? Is anybody there?

O.k. so, while we're waiting for our visitors to arrive, I'll keep posting progress photos. Actually, the visitors *did* arrive in person, and we all had a great time. . .but they haven't "arrived" to officially announce their news in internet land. There have been some leaks here and there but I can neither confirm nor deny the allegations which have been made against . . .oh. . . what? Wait. . .um, nevermind! Sorry, I got a little off track there.
Anyhow, since we're still waiting I think I'd better start putting up photos of the progress that's been made since their visit.
He's back down to the hairless look for some more serious work. A mane and tail are important but nowhere near as important as what goes under them. If that isn't correct, it doesn't matter how much hair you pile on it, it'll show up. 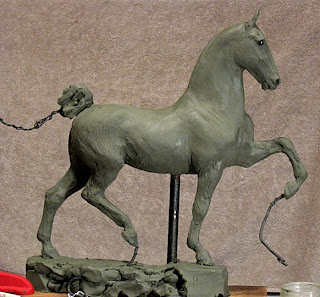 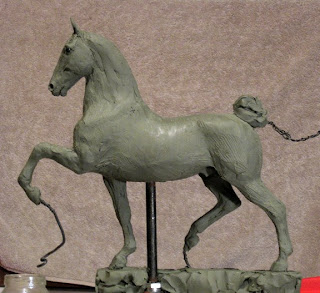 After removing the temporary mane and tail it quickly became obvious that the back was too short, the eyes weren't in the correct place, the neck and shoulder were too heavy, and the raised rear leg was just. . . well. . . there was something wrong with it. 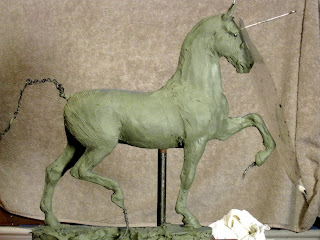 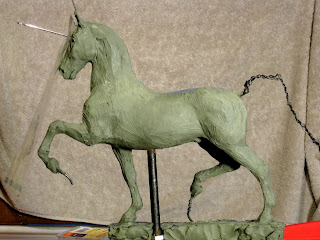 Better in some ways. . .not so much in others. *sigh* This is going to be a long night.
Posted by Katherine Bogucki at 3:08 AM 5 comments: Links to this post